Despite the drawbacks, solar energy use has surged at about 20 percent a year over the past 15 years, thanks to rapidly falling prices and gains in efficiency. China, Japan, Germany, and the United States are major markets for solar cells. With tax incentives and efficient coordination with energy companies, solar electricity can often pay for itself in five to ten years.

As of 2011, the technology produced less than one-tenth of one percent of global energy demand (National Geographic). The Union of Concerned Scientists lists numerous benefits, beginning with solar energy being inexhaustible and free. The attractiveness of solar power production varies with the economics of investing in equipment, and cost competition from fossil fuels. Solar power accounted for more than a third of all net new power capacity added worldwide in 2017, a larger share than any other new source. And solar power is becoming much more affordable. The cost of electricity from large-scale solar projects has dropped by 72 percent since 2009 (The New Your Times; April 5, 2018). Scientific American estimates the cost of solar power falling below the current average power cost by 2018 or 2020 (Alex Silbajoris; March 10, 2018). In  2018 about 12 percent of all the electricity that the world consumers use is solar energy (The New Your Times; April 5, 2018).

The rise of energy storage technologies will help ensure that solar energy can become even more reliable, and capable of providing electricity when there’s no sunlight, or during periods of increased demand for power. But beyond that, innovation will help reduce total costs of these systems by introducing new technologies into the marketplace.

The world leader in investing in renewables, by far, is China. The country accounted for nearly half of all renewable energy investments worldwide (The New Your Times; April 5, 2018).

A new type of solar cell is coming to market. The type is called Perovskites. It may have the potential to outshine silicon in solar panels. A typical silicon-based solar cell converts around 21-22% of sunlight into energy, and the material’s limit is 29%. Oxford PV thinks that its approach of perovskite-on-silicon can get that efficiency up to around 25% (The Guardian 28th February 2018).

Perovskites are now serious challengers to silicon solar cells. That does not mean they will succeed. The history of technology, in this area and in others, is littered with ideas that looked good (and, indeed, were often technically superior to existing alternatives) but nevertheless fell by the wayside. The power of incumbency should not be underestimated. And the price of silicon-based solar power has dropped markedly over the past decade, particularly as a consequence of enormous investment by the Chinese (The Economist; Feb 3rd, 2018). 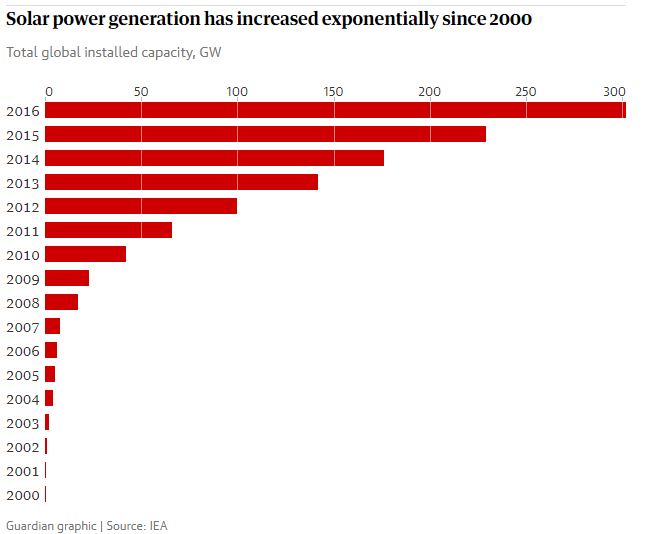 Some people call it the “sunrush”: a 25-year period in which solar power has grown exponentially, transforming the technology from rarefied oddity to the world’s fastest-growing energy source. This surge, which saw 100MW of capacity in 1992 rocket to more than 300GW in 2016, has been largely driven by falling costs, which plunged 86% between 2009 and 2017 (The Guardian 28th February 2018).

Will the next 10 years show that we use more energy from solar than from fossil fuel?

This site uses Akismet to reduce spam. Learn how your comment data is processed.